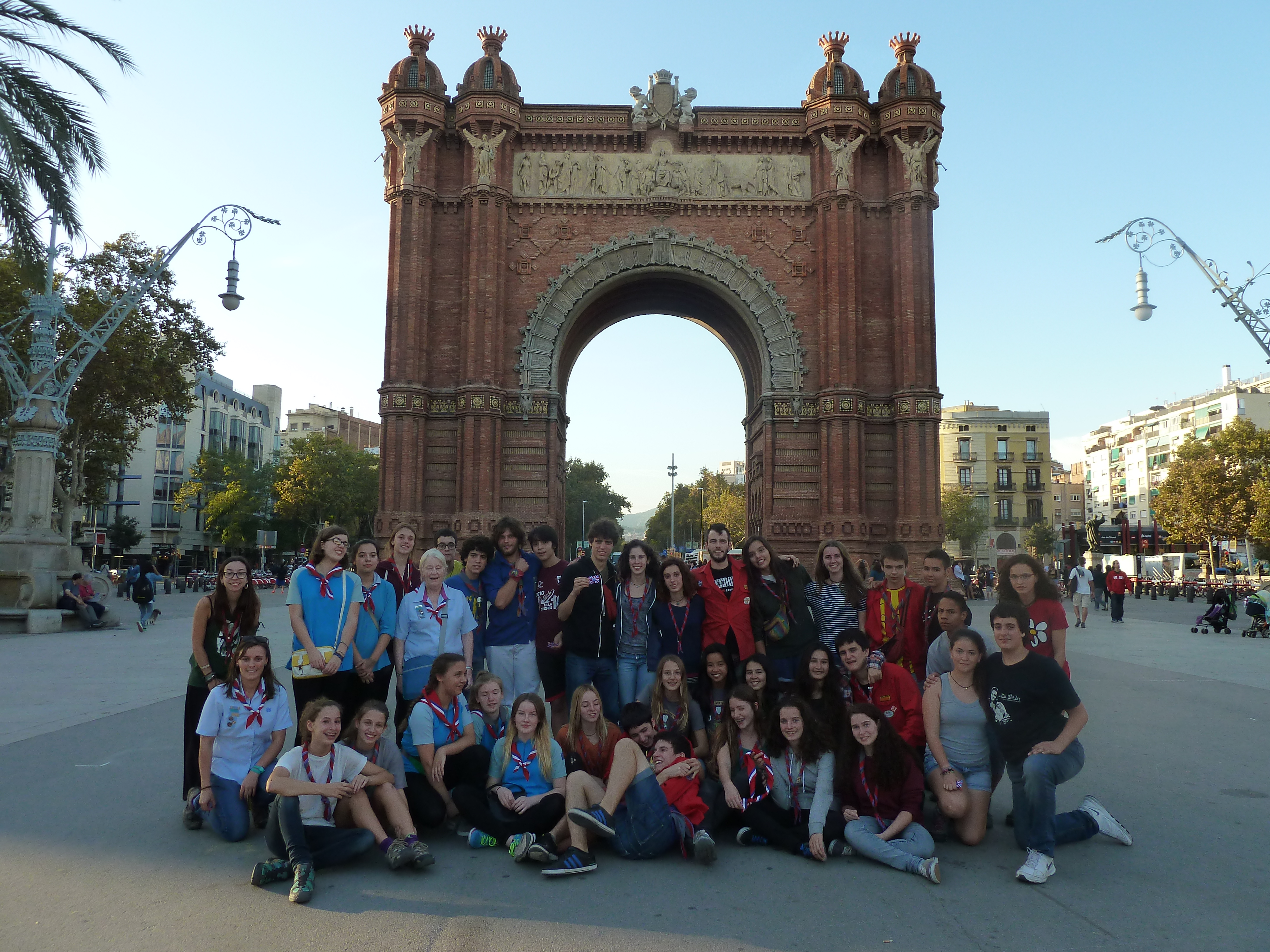 Five girls and two leaders from 1st Central Wandsworth Senior Section went to Barcelona in Half Term 2014. We were successful in our application for £210 from LSW County, for which we are very grateful. Everyone had a great time and we can’t wait to start planning our next trip!

It was an early start for everyone – we met at Clapham Junction at 7:45am to head off to Gatwick Airport. After no confiscations at security control, we waited excitedly to board our flight and just two hours later we had arrived!

First stop, our apartment. We stayed in a four bedroom apartment in Calle Mallorca with a little kitchen and a terrace. It was only two stops on the Metro, but we walked to make the most of the lovely weather! In fact, we had to stop for a little drink in the bar below our flat.

Once we had dumped our bags, we headed off to the Arc de Triomf, glimpsing Gaudi’s magnificent Casa Mila and Casa Batllo as we got on the metro. Coming up at the other side, were 27 enthusiastic Rover Scouts. In the sunshine by the Arc de Triomf we shared games we knew (Splat, Ride my Pony) and games that were quite new to us. We were joined by some other Scouts who just happened to be passing by. We were all very shy to start with, but the Scouts were very welcoming – it was a shame that they had to head off to a camp on Saturday evening but we have promised to keep in touch! We gave them some UK badges and a necker to remember us by!

Because we were staying in an apartment, it meant that we could pick what we wanted. Lizzy and Caroline helped us to make “Albondigas”, Spanish meatballs with milk to bind rather than egg. We were really tired and it was very busy in the supermarket but we were really pleased with the end result!

The clocks going back gave us an extra hour in bed so we were ready and raring to go on Sunday morning. We could choose between beach and mountains. Our district commissioner had given us some money and we put it towards train fares to visit Tarragona, a large Catalan town an hour to the south of Barcelona. The weather was beautiful and the sea breeze in Tarragona gave us a break from the heat that we wouldn’t have got in Barcelona itself!

We arrived at 12pm and headed off to explore the Roman parts of the city – there is an amphitheatre almost on the beach! We loved exploring the other Roman ruins too, and the views from the Palace were incredible.

By this point, we were all quite tired, so it was essential that we stopped for an ice cream in the square, before heading off to the beach. We loved paddling in the sea and playing games and it was really good to spend time getting to know each other. Although we all go to Senior Section, three of us have only been going since September, so we are still quite new!

We spent a few hours on the beach and then caught the train back in to Barcelona. We had really enjoyed visiting the sights and learning about the Romans in Catalunya – we were really surprised how much there was to see and how good the weather was for the end of November.

After a quick vote, we decided to have pizza and salad for tea, followed by lots of games of Uno! At the end of each day, we picked what we wanted to trash (what we hadn’t liked) and what we wanted to treasure from each day – the beach was our top treasure- for some of us, of the whole trip!!

We started the day with some lovely breakfast – Lizzy had been to the bakery and brought us fresh baguette, mini croissants and fartons, which are typical for breakfast in Barcelona (we also loved the name!!).

Each day we made our packed lunch before setting out and today we also had the baguettes, which were delicious.

Our first stop was a walking tour. Eleni did the navigation to take us to Placa de l’Angel where we met our tour guide, Ruby, from Sheffield. We had a two and a half hour tour of the Gothic district, which was fascinating!

We started by the Palace where Queen Isabelle and King Ferdinand met Columbus returning from the Americas, before tracing his steps round to the Cathedral. Within a few square miles there was 2000 years of history. Maddie was really interested in the damage from the shelling in the Civil War and we couldn’t believe that the Spanish jews had survived the plague as a result of the very laws designed to repress them. In the evening, we used the ipad to look up some more history including videos of the “Gegants” – huge dolls paraded in Catalunya – “Castellers”, or human towers, and the rather jazzy Catalunyan national anthem. We stopped for lunch in the Parc de la Ciutadella with a view in the background of Columbus pointing out to sea (not towards America, or Madrid!!)

We did a whistle stop tour around the port that was redeveloped for the Olympics. It was interesting to see all the artificial beach and the parks that have been developed and to compare it to what has been done in East London in recent years.

We zipped off to buy our Sagrada Familia tickets for Tuesday before an English afternoon tea, with more Spanish treats than scones. We all tried “Panissets” – a Catalan speciality for All Saints’ Day – marzipan covered with different fruits or nuts. We also tried ensaimadas but learnt that they don’t dunk well in tea!!

We spent a few hours resting or getting glammed up! We went out to Es Born district and chose where we wanted to go for dinner. We weren’t sure what to have from the menu so the waiter brought us lots of things to try. He made us a special fruity cocktail, and brought Lizzy and Caroline a glass a cava as a treat! We enjoyed the “patatas bravas” and of course the paella. Full to the bursting after our Spanish puddings, we headed back to pack. It was a lovely way to spend our last evening.

We had quite an early start – we had to leave our bags at the station so we could enjoy our day without carrying them around!

First we went to Parc Guell, Gaudi’s Park, where we got an incredible view over Barcelona out to see. We couldn’t believe how majestic the Sagrada Familia was, which dominated the skyline. We loved all of the mozaics in the park, which was quite peaceful considering how many people were visiting. This is the only time that we had a little bit of rain but not enough to have to put our coats on!

After the park, we went to see Gaudi’s masterpiece, the Sagrada Familia. We tried to work out the similarities in his designs and noticed a lot of nature. Some of us went up to the towers to see the roof in more detail and a view over the park around. The light streaming in through the stained glass windows was beautiful, and made it a very spiritual place for us all. Although some of us have been to Barcelona before, it was the first time we had been inside.

We finished off a very busy few days by going to MareMagnum, a huge shopping centre by the sea, though surprisingly didn’t buy too much before heading back to the airport.

A few hours later and we were back in London, all very tired but better bonded as a group and looking forward to our next adventure with Senior Section.

Our “Treasures” from our Trip

“Getting to know people I didn’t know that well before”

“Visited interesting places, nothing was boring”

“The food” “You always say the food…”

“The light in the Sagrada Familia”